Industry and community collaborate on an award-winning mini-grid project 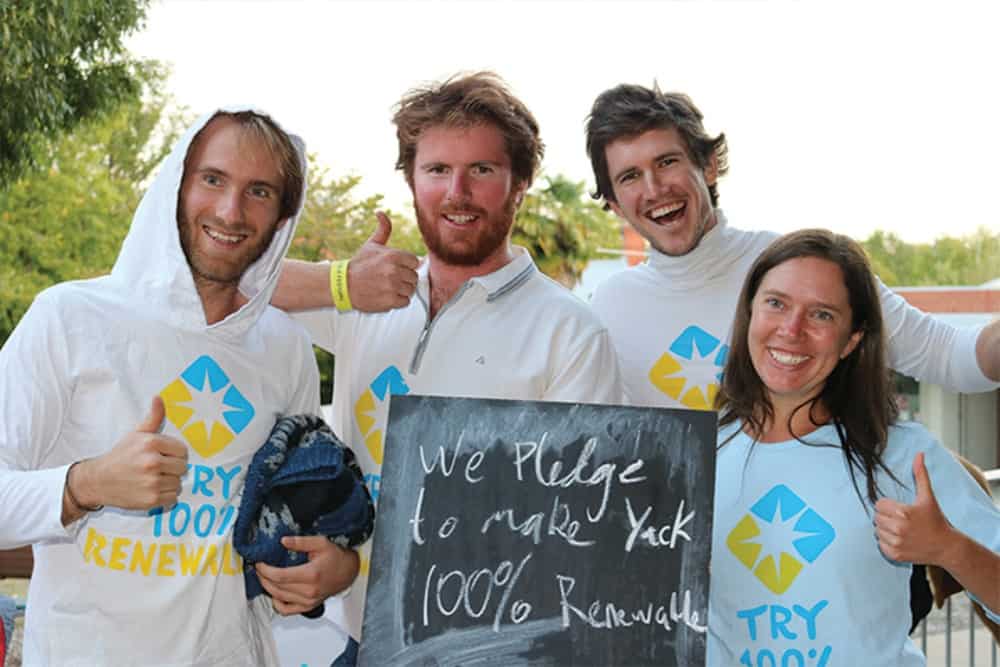 The trifecta of tumbling costs, climate change and a yearning to reclaim power is drawing many people and communities globally to consider how they might embrace a true low-carbon, renewable energy future. Yackandandah, in north east Victoria, is one such place. Residents have set an ambitious and unambiguous target to transition to 100 per cent renewable energy by the year 2022.

On a cooling autumnal Yackandandah Sunday in March 2014, Indigo Shire Council opened its doors for a forum to consider how locals might play a role in unlocking the diverse potential of distributed energy resources (DER).

In the two hours that followed, an enthusiastic crowd learnt how they might decarbonise, decentralise, democratise and demonstrate the transformative power of renewable energy systems.

Soon after, Totally Renewable Yackandandah (TRY) was formed. TRY immediately set to work, motivated by what other communities, businesses, entities and utilities have been doing in the face of mounting evidence on the rapidity of climate change.

In setting the goals of TRY, the committee was heavily influenced by Australia’s inaugural Community Energy Congress (CEC), held at Old Parliament House in Canberra in April 2014.

Stories of local people adopting place-based solutions to energy generation and usage were evident and a new energy narrative was emerging based on people, passion and values. TRY’s goals coalesced around a fireside sharing of soup and beer, just one week following the CEC.

TRY anticipates achieving the 100 per cent renewable energy target with a mini-grid; a series of microgrids across the town underpinned primarily by household solar generation, batteries and smart-energy orchestration. The group is also working on projects to both reduce demand and are installing community-scale generation and storage assets.

The people of Yackandandah were acknowledged for their hard work, when TRY received the 2017 Banksia Sustainability Award in the Sustainable and Resilient Community category – a fitting recognition of the courage and bravery shown by households across the creative town.

Fast forward to September 2019 and the town’s momentum is showing no sign of slowing – TRY recently celebrated a series of solar installations on ten public buildings, which are also tied to the existing mini-grid using the Ubi, a smart energy controller developed by Mondo, experts in DER projects.

These installations integrate behind-the-meter batteries to manage differences in generation and demand, and add resilience. This most recent project, partially funded by the Victorian Department of Environment, Land, Water and Planning, involved placing solar photovoltaics (PV) on public halls, the museum, the Country Fire Authority and even the local opportunity shop.

To broker trade amongst the mini-grid, TRY also initiated a community energy retailer, Indigo Power, to start trading tariffs before the year is out.

Yackandandah sits in the electricity distribution area owned by AusNet Services, which also own Victoria’s transmission network, along with the gas reticulation west of Melbourne.

In order to reach the 100 per cent renewable energy target, TRY recognised the network as both a key enabler and a potential inhibitor.

In its innocent beginnings, the group scheduled meetings with AusNet Services to toss up ideas around co-innovation between a electricity distribution and a local community. TRY wanted to disconnect from coal and maybe the grid. AusNet Services had assets worth billions, expertise and a significant number of Victorians that depended on the provision of safe, reliable and predictable power.

It is clear that network providers have both a challenge and an opportunity to affordably integrate renewables into a system originally based on one-way traffic and consistent demand.

TRY then approached Mondo, experts in DER, back in 2016, to answer the question – how can Yackandandah rapidly transition to clean power, strengthen the local economy, leverage existing assets and be honest about the climate threat?

Mondo and TRY now share a renewable energy vision – to enable people to take ownership of their energy needs. The pursuit of this vision has seen the partnership develop the necessary hardware, software and, perhaps more importantly, a replicable community framework to enact the vision.

In July 2019, Mondo received the Clean Energy Council (CEC) award in community engagement for their partnership with TRY and the delivery of the Yackandandah mini-grid. The project caught national attention when, on 8 February 2019, the Yackandandah mini-grid achieved 1GWh of locally produced renewable energy. This equates to more than $160,000 in local energy cost savings and accounts to approximately 25 per cent of energy sourced from the sun.

At the same time, AusNet Services received a CEC award for innovation with an Australian Renewable Energy Agency (ARENA) funded microgrid trial alongside the University of Technology Sydney. This second Yackandandah microgrid sits on a constrained single wire earth return (SWER) line, and AusNet Services was able to use the contracted capability of Mondo’s Ubi to manage active and reactive power from inverters, and adopt orchestration of loads and some batteries.

The research delivered some compelling evidence regarding the capacity to dynamically manage voltage swings resulting from high penetrations of solar PV and spikes in demand. TRY brought to the trial ‘community and relational capital’, an asset more challenging for distribution network service providers.

With grants and donations, TRY now draws on the contract services of Mondo to undertake DER projects. With Victorian Government funding, TRY is currently building a third microgrid on another SWER line serving 33 residential properties. With the Ubi, Mondo will help deliver a project to orchestrate rooftop solar and battery systems, and efficient CO2 heat pump hot water services. This microgrid will further trial how to use smart energy control platforms to smooth out power demand and generation cycles in a way that saves locals money and averts costly asset upgrades – a win for people, asset owners and for clean energy.

TRY seeks to be an exemplar of effective, non-partisan cooperation between neighbours, business, government and utilities. The people of Yackandandah feel very fortunate to have made many advances toward their 100 per cent renewable energy target. However, much work awaits despite rooftop solar installation densities in Yackandandah exceeding 55 per cent and a growing list of awards and successful projects.

TRY strives to make power personal for Yackandandah people; to unpack the complexity of the system, to uncover the value of reliable clean power and to highlight the damage caused by legacy generation systems. In doing so, TRY signals a new, hopeful, courageous and mindful energy system. Will ‘Yack’ succeed? Who knows, but they do know that the best chance of success will be working beyond organisational boundaries with hope, courage and mindfulness. And a little bit of doggedness!